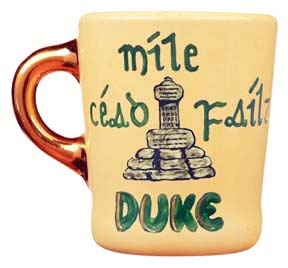 A STAMP on history…  The first two John Wayne mugs made were for Flying Leathernecks 1951 and The Quiet Man 1952. They were made on the heavy Wallace China restaurant mugs a company in Los Angeles, California. Along with the Wallace imprint on the bottom, you’ll see the stamp that reads, “Personalized by McFARREN Corona del Mar”. Bob McFarren and his wife started a coffee mug customizing business shortly after WW2.

Bob Williams went to work for McFarren after he returned from WW2. Bob Williams ran the business when McFarren was called back for the Korean War. It was during this time Bob Williams landed John Wayne’s business, working closely with Mary St John, Duke’s friend and personal secretary of almost 30 years. This is why the first 2 mugs Bob Williams did have the McFarren stamp on the bottom.

When McFarren returned from the Korean War he no longer needed Bob Williams who set out on his own. Mary St John and John Wayne were so pleased with his first 2 mugs they naturally turned to him for future creations. It’s interesting that the next 2 mugs, Big Jim McLain 1952 and Trouble Along the Way 1953 are stamped on the bottom “The Potters Wheel”. It’s not until Hondo 1953, that we see the “Bob Williams 515 N. Main Rm 20 Santa Ana Calif” stamp first appear. Bob Williams changed the address on the Sea Chase 1955 mug to “222 Occidental”. He changed the address again for Legend of the Lost 1957 to “155 W 3rd ST Tustin Calif” and lastly to “486 So D St. Tustin Calif” for The Man Who Shot Liberty Vallance 1962. Please note, we have seen instances where the stamps were used out of order and some mugs that were not stamped at all. In all, Bob Williams made 25 mugs for John Wayne, every one of them a hand painted masterpiece.

McLintock 1963, Circus World 1964 and In Harms Way 1965 are somewhat of a mystery. There is no stamp on the bottom in reference to who customized the mugs although the McLintock mug has a Wallace stamp once again for the manufacturer of the mug. This is a good place to note the Wallace company went out of business in 1964 and the mugs began to dry up shortly thereafter. Bob Williams scrambled to find as many as he could to finish the Donovan’s Reef mugs but by Circus World 1964, the mugs used were different and changed several times until 1976. The Circus World mugs were manufactured by the Hozan Company of Yokohama, Japan. They are quite different from the heavy Wallace restaurant mugs used previously. They are lighter, shorter and white. Also of note, the McLintock mugs appear to be the last hand painted mugs. Beginning with Circus World and going forward the mugs appear to be customized by a more automated “transfer” process. We have seen actual transfers for the Chisum and True Grit mugs and the color separations used to make them.

Bob Williams produced the mugs from The Flying Leathernecks 1951 to Donovan’s Reef 1963.  He moved his location several times during this period.

Ketchum Originals at 1105 Long Beach Blvd, Long Beach Calif. Produced the mugs from The Train Robbers 1973 to The Shootist 1976.

Along the way however, John Wayne had others made by these same companies which can be accessed by our “OTHERS” link above. 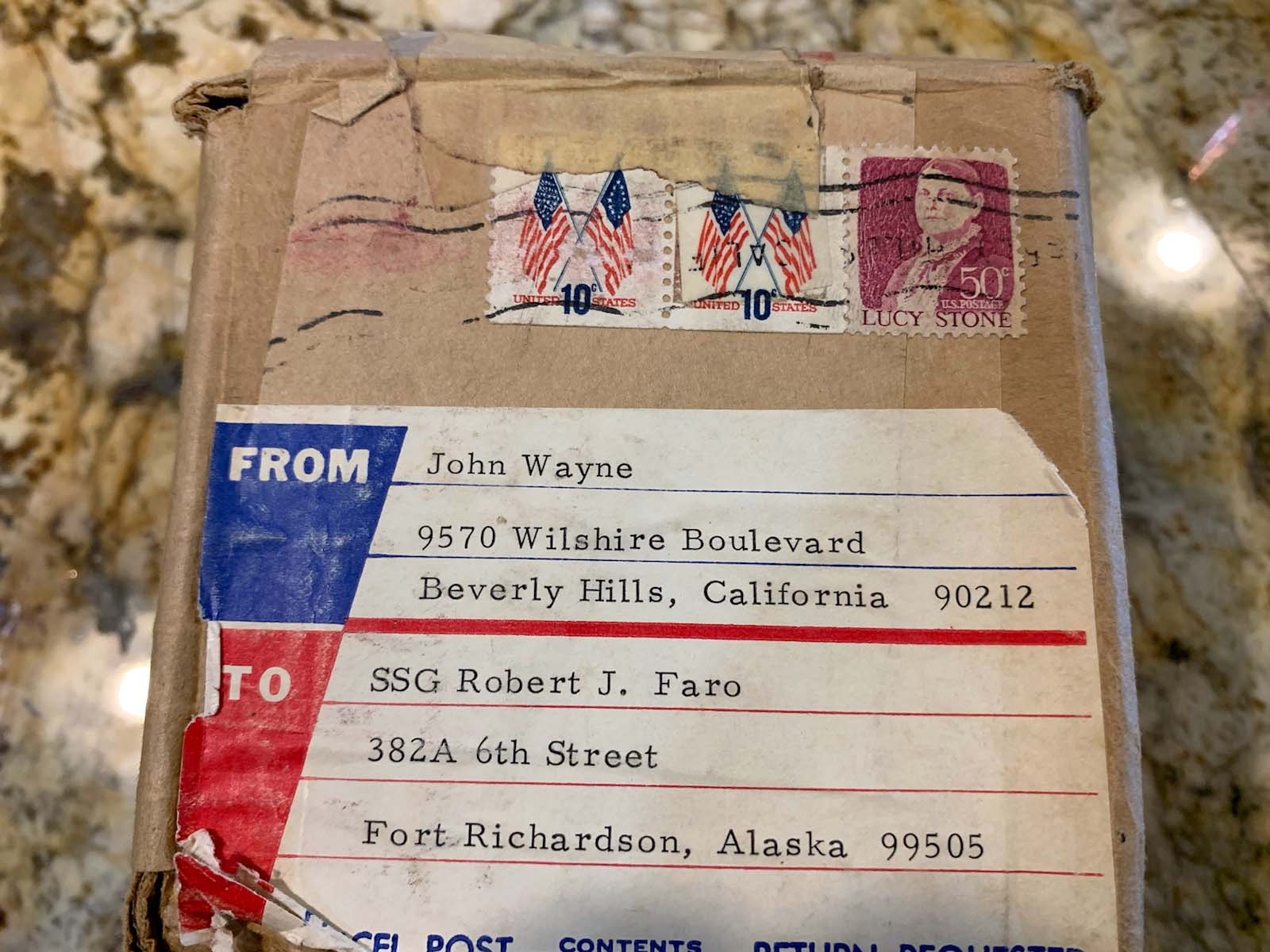 The images to the left and right show the typical packaging used when John Wayne shipped his mugs to his friends and coworkers. Imagine their excitement when the package arrived! 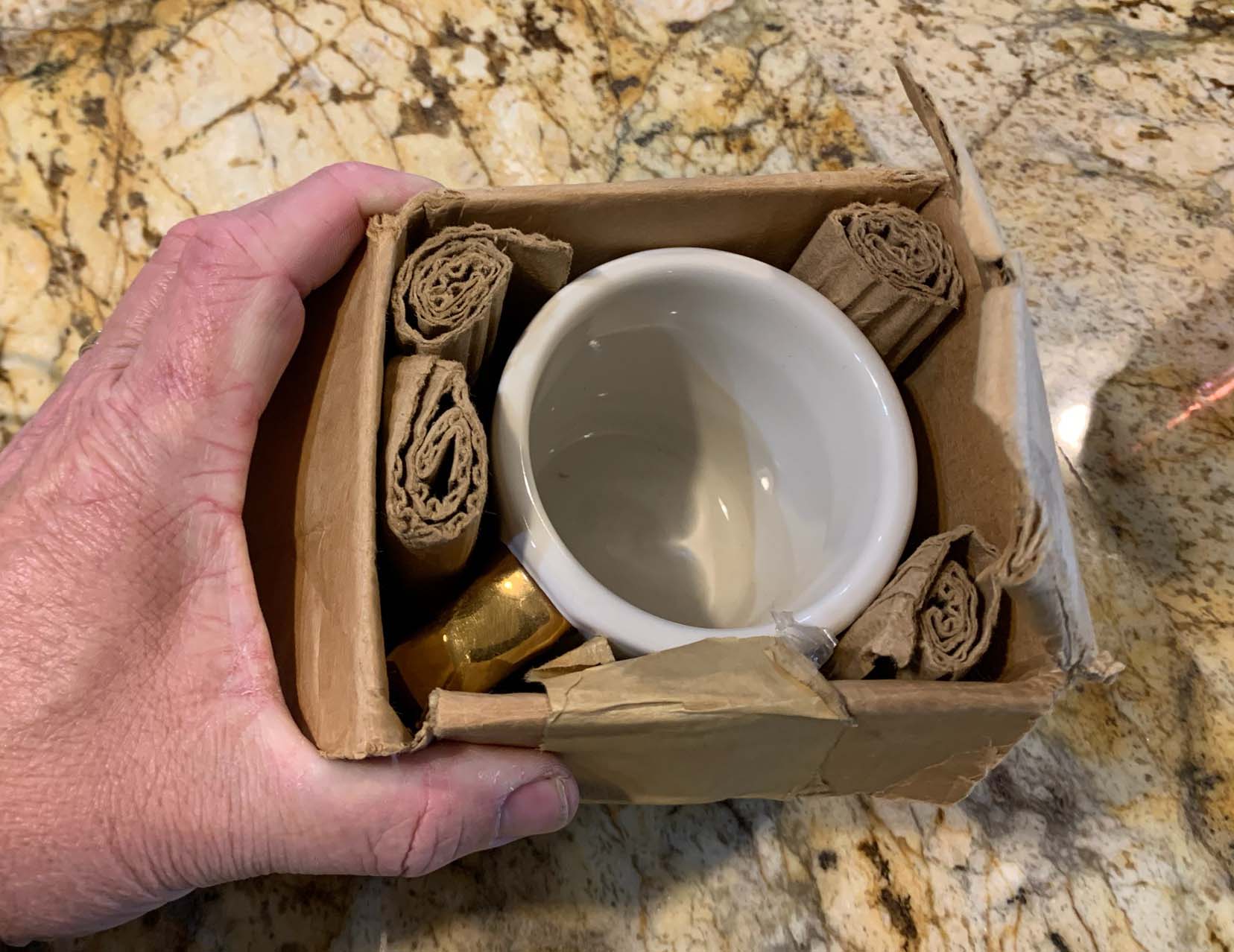