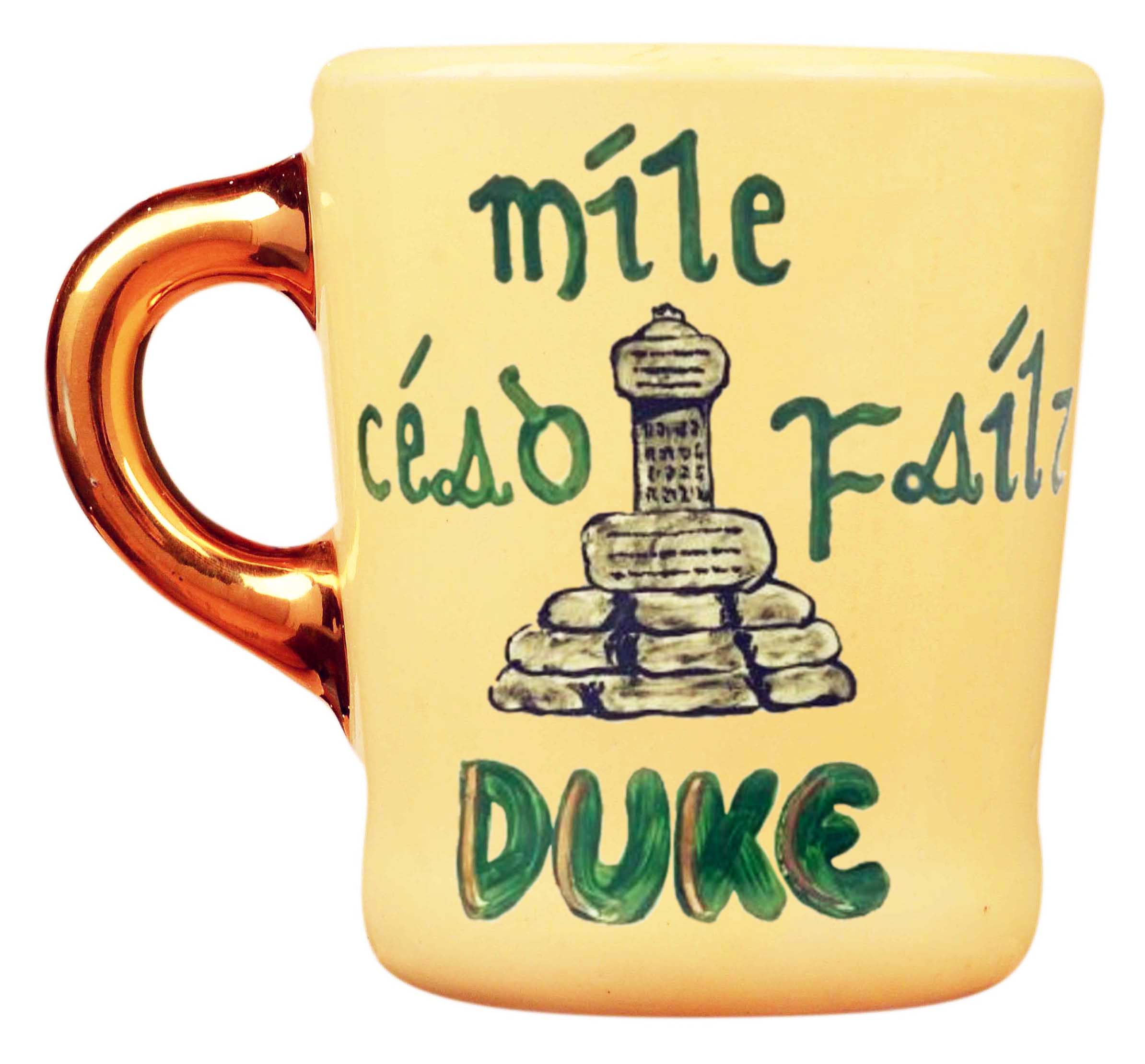 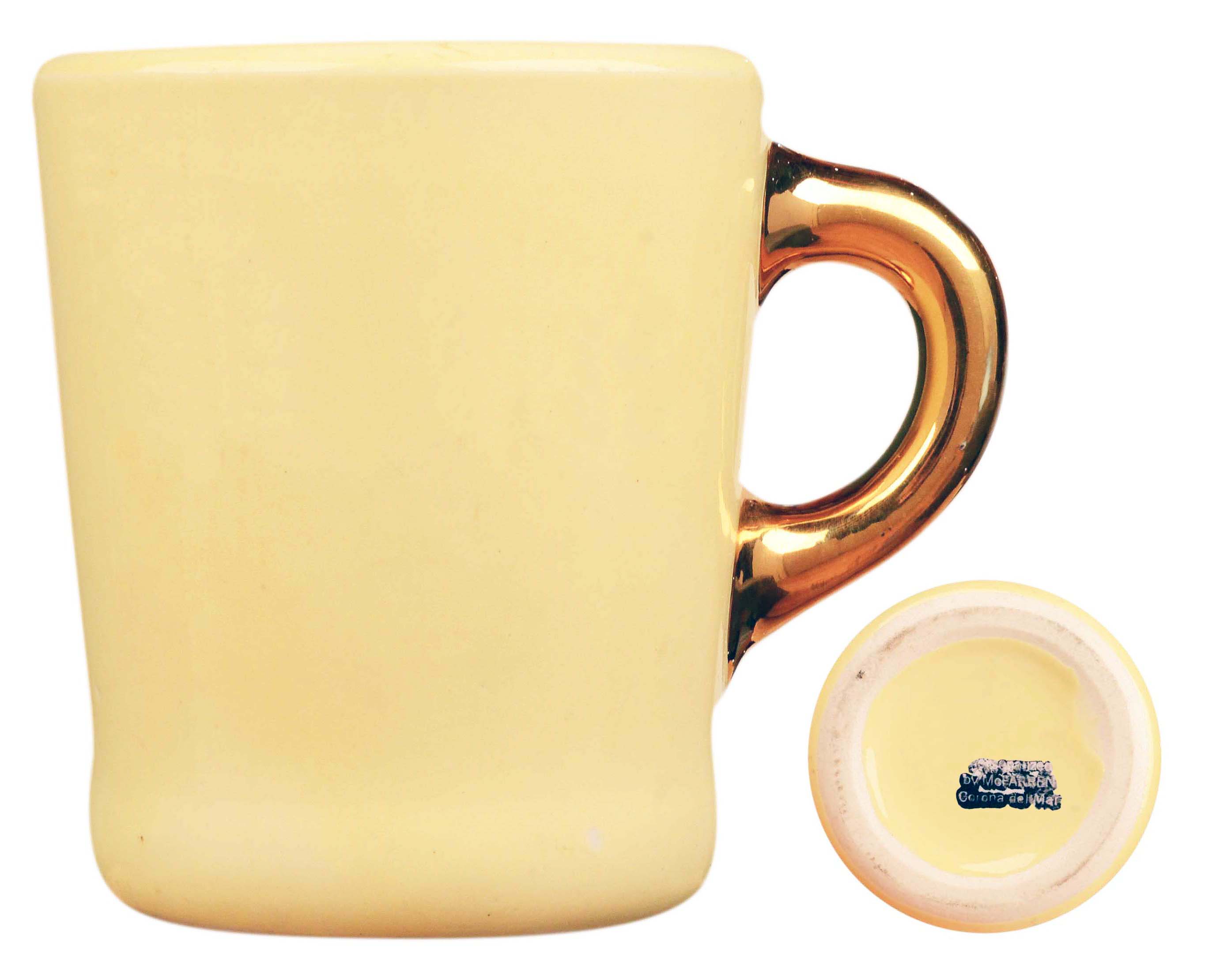 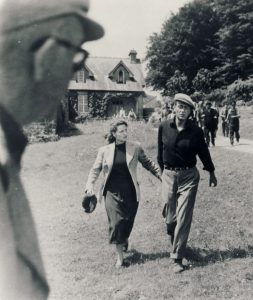 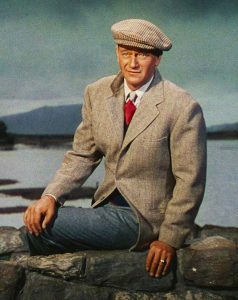 The Quiet Man mug was the second mug Bob Williams did and the first done on a Wallace mug with a distinctive yellow cast instead of what became the traditional beige color.   Many think it was selected due to the attractive combination of the Irish green painting on the yellow background.   According to Bob Williams however, the yellow mugs were simply the ones he had available at the time.  This is confirmed by the other yellow mugs he painted for John Wayne in the future, like the Big Jim McLain mug which was next.  The movie, set in Ireland, has the traditional Gaelic greeting; “Céad Míle Fáilte” which translates to “a hundred thousand welcomes” on the front.

Like the first mug, this one is blank on the back.   The Flying Leathernecks mugs were the only ones personalized on the front, like the props used in the movie.   The Quiet Man mugs were the only mugs John Wayne gifted after a movie to not be personalized to their recipients.   While The Quiet Man mugs are one of the most valuable today,  provenance is the only way to establish who they were given to which affects the value.

Unfortunately we lost Maureen O’Hara, Duke’s favorite leading lady, in 2015.   On Nov. 29, 2016 Bonham’s held an auction in New York for Ms O’Hara’s estate.   Included in the auction were the 3 mugs she had been given by John Wayne.   Shortly before her Quiet Man mug went on the block, a gentlemen entered the room and won the auction with a bid, including buyers premium of over $10,000 dollars.   The winning bidder immediately left leaving many of us wondering who he was, maybe a secret admirer of Maureen or a big John Wayne fan.

This is the most we’ve seen paid for a Quiet Man mug.  Because it belonged to Maureen O’Hara, was in mint condition, sold at a well publicized Bonham’s auction and found an extremely motivated collector. 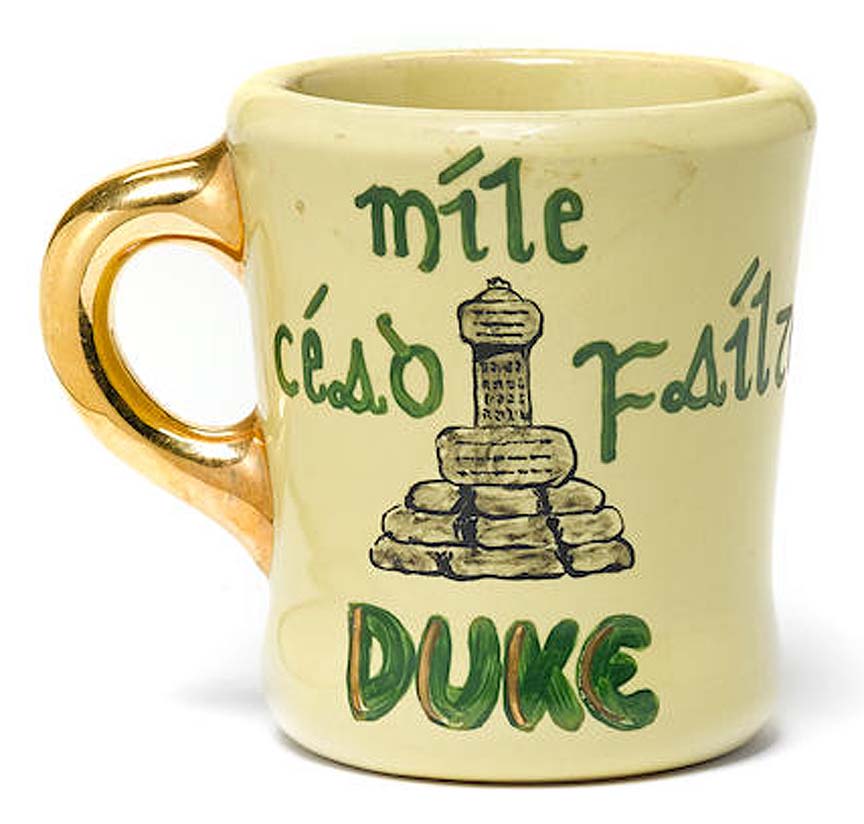 “A MAUREEN O’HARA JOHN WAYNE GIFTED MUG FROM THE QUIET MAN
Pale yellow ceramic mug with a gold handle, painted with the Gaelic phrase “Céad / Míle / Fáilte” and “Duke.” The bottom of the mug is stamped with the name of the maker, McFarren, in Corona del Mar, California. This mug was gifted by Wayne to O’Hara at the end of the production of The Quiet Man.”

*“This is a very hard to find collectible- a personal gift to James Barker- who was John Waynes personal makeup artist on many of his movies. It was later given to my father from his widow Dorothy Barker and kept safely stored for over 60+ years now.”

If you have any additional information about this mug, or any other John Wayne mug, please hit the “Contact” link and let us know.  We want to make the John Wayne Internet Mug Data Base (JW-IMDB) even better…
THANK YOU!